Have you ever thought about the kind of bear David slew? Or what kind of bears attacked the forty children that mocked Elisha in 2 Kings 2:23-25? In this week's Faces of Israel, we are highlighting Israel's Syrian Brown Bear on exhibition at the Haifa Education Zoo located in Haifa, Israel. Sadly, the Syrian Brown Bear is in decline due to loss of habitat and poachers. Nevertheless, this adorable, cute, and seemingly cuddly bear is at the heart of David's preparation and training for one of the greatest confrontations and conquests ever recorded: David and Goliath.

When David was brought before king Saul he said, "Let no man's heart fail because of him; your servant will go an fight with this Philistine." And Saul responded saying, "You are not able to go against this Philistine to fight with him: for you are but a youth. . ." And David began listing his qualification, his oral resume: "thy servant kept his father's sheep, and there came a lion, and a bear, and took a lamb out of the flock: . . . thy servant slew both the lion and the bear: and this uncircumcised Philistine shall be as one of them, seeing he has defied the armies of the living God. Moreover, The LORD that delivered me out of the paw of thereon, and out of the paw of the bear, he will deliver me out of the hand of the Philistine!" And Saul said, "Go, and the LORD be with thee." (1 Samuel 17:32-37)

Although unique, David's story is our story, your story. A story that teaches us that our past experiences serve our future challenges. What set David apart was his perspective and purpose. What did David see when faced with the lion and the bear? A lamb. He did not consider the size, the strength, nor the personal threat of the lion or the bear, but only the lamb that was in its' mouth. It was his lamb and it was not for the taking. David's example encourages us to not look at the circumstance or the obstacle, but to focus on the purpose and the vision. And if you keep your focus on your purpose and your purpose is central to your situation, your obstacles will become stepping stones to your destiny; and your Goliath will become just another victory.

Below is a video we filmed at the Haifa Educational Zoo in Haifa, Israel. As you will see David's ferocious Syrian bear is quite adorable; who knew, did you?

Background song Adon Olam (Lord of the Universe) by Mayday Tasa. Click here to listen to his song.

*Disclaimer: Faces of Israel is intended to bring you unique educational content that connects you with Bible with Israel. Not all posts are actual sites visited during a tour. But all posts are unique to Israel: its' rich history, prophetic present and glorious future! 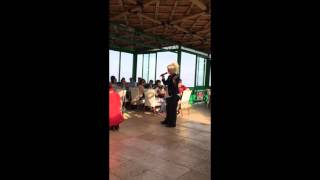 Golgatha: Show Me Your Glory!